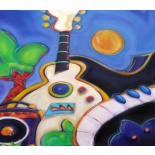 Robert's goal is to "Get YOU Noticed and to "Get YOU Compliments" by wearing Original Art for your Ears! These colorful and vibrant original works of art for your ears are bound to be a conversation starter. He hopes you enjoying wearing his jewelry as much as he loves making the jewelry! Blessings,

Robert loves creating earrings and pendants that get YOU Compliments!

Creating one of a kind art since 1984 is Robert's dream come true.  He knew in grade three that he was going to put paint on paper when he grew up!  It took him until he was 30 years old to start creating from his heart.

After painting hundreds of thousands of small works of art as jewelry Robert was called to go bigger.  He started going bigger by creating architectural ceramics pieces that were 2 feet by three feet but in that scale the ceramic pieces very heavy.  So inspiration struck him and he went and bought everything he needed to create on canvas which would be lighter and more stimulating to his artistic nature.

Robert had a successful career in designing large paintings.  He had sell out shows in New York and Toronto and had his work in a few small galleries as well.

In 2008 Robert lost the vision in both his eyes and had a total of 7 eye surgeries with many years of recovery.  In 2013 his eyes were healed enough to start to design a new way to bring his talent to his clients.  His creative fire was ignited once again and he rekindled his Original Art To Wear jewelry line out of watercolor paper this time.

Robert's two new jewelry lines "Original Art To Wear" & "Art In Miniature To Wear" have been a great success as well.  There are 30 plus retail outlets that are selling is art as of this writing.

Since 2020 he has been getting into the online marketing world.  He looks forward to having mindful clients from the world over getting compliments wearing his jewelry!

Products made without the presence of chlorine.

Products, especially of cosmetics and textiles, that are relatively unlikely to cause an allergic reaction

A method of manufacturing products which allows for energy conservation and has minimal negative impact on the environment and people.

What makes our ear wires hypoallergenic?

Shipping inside Canada is free we use only Canada post to ship our packages.  To ship everywhere else we still use Canada post but we charge international customers $5.00 to help cover the shipping costs.  It costs about $10.00 to ship outside the country.

We only use Canada post for shipping.  If you need us to ship your package a different we can discuss other shipping options.

If you dislike the earrings we ask that you pay the shipping fees to send your earrings back and we will send you back your money when we get our product back from you.

If our ear wires give you the itchy ear, hurt your ears or you have any problem we will give you your money back.  We just ask that you ship the earrings back to us at your cost.

Get Noticed & Get Compliments Wearing Our Handmade & Hand Painted Jewelry!

Robert needs to create the same way he needs to breathe.  He has been creating one of a kind art since 1984.  His first successful foray into the business of art was also called "Original Art To Wear."  Porcelain clay was his medium and his product was earrings, pendant and pins.  An art agent Joan chased Robert down and convinced him that she was the art agent for him.  She even took a 5% cut in her price to get his business.  Joan sold Robert's jewelry all over western Canada.

In the 1990's after Robert had made more than 250,000 pieces of jewelry he needed to go bigger.  So he picked up a paint brush and played with watercolor and acrylic paint on diverse surfaces such as aluminum and Yupo (a type of watercolor paper) along with every medium in between.

In 2008 both of Robert's retinas detached within three weeks of each other so he was totally blind for about 60 days.  He had a total of seven eye surgeries before he got enough of his vision back in 2013 to finally return to his professional painting career.

There are over 30 retail outlets that sell Robert's jewelry lines.  In 2020 he made a big push to move to the internet to give people from all over the world a chance to be cheered up by his creativity.

And in 2021 Robert found Mindful Market and he knew this would be a good fit with his life style.  He is grateful to be here now.

Cheering Up People With My Art & Attitude!


What He Believes In

Robert believes in meditating before he creates.  He loves to walk whether in big cities or deep in the woods of Vancouver Island, BC where he lives.  His walks inspire him, enliven him and allow him to create with passion.

He is committed to being mindful by meditating throughout the day, eating a diet rich in local food and grown organically and by being present to where he is emotionally.

Robert lives on Fuller Lake where people come to fish and play with their children in the park.  He lives in a town covered in Murals called Chemainus in British Columbia, Canada.